At the largest 12th international exhibition Inno Trans 2018 in Berlin a new record was set: 3,062 exhibitors from 61 countries in 41 halls and in the open air with 3,500 meters of tracks. 62% of exhibitors came from outside Germany. The exhibition features 4 009 innovations and 146 world premieres. 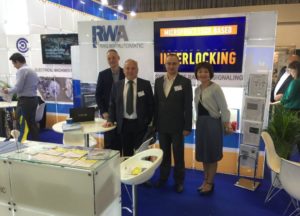 RWA first took part in the exhibition as an exhibitor at the consolidated booth of Ukrainian manufacturers of railway equipment “Ukraine: Railway Supply” – in the field of automation, communications, transport engineering and logistics.

During four days our booth was visited by representatives of railway and transport companies, manufacturers of products from more than 25 countries of the world. In the course of thematic discussions, demonstrations of products and opportunities of the company, the exhibition participants showed a genuine interest in the development of RWA in the field of general and non-public railway transport, underground and urban on-ground transport.

During the exhibition the main issues for discussion were:

– cooperation in promoting “Industry 4.0” in the transport industry;

– problems in the operation of systems with closed architecture associated with the high cost of technical support and changes in application software due to changes in the track development of railway facilities;

– application of new technologies and modern integrated solutions in logistics;

– the combination and integration of various systems and equipment in the design, construction, modernization of infrastructure facilities;

– application of open source software with the possibility of its verification and subsequent support by the customer;

– certification and ensuring the safety of the operation of railway automation systems in accordance with European and international standards (EN, IEC, ISO groups).

As a result of the exhibition, a number of preliminary agreements were reached with foreign partners regarding the introduction of RWA products at transport enterprises of India, Kazakhstan, Uzbekistan, Georgia and other European and Asian countries, as well as the use of the most modern equipment of railway manufacturers from different countries and continents.