The report at scientific and practical conference «Perspectives of implementation of means of traffic safety on the railways of Ukraine». Khmelnik, Vinytsia Region, 2010.

Upgrade of technical devices shall be carried out by way of reducing of their number and by carrying out the following actions:

It is known that the major element practically of all systems of railway automatic equipment providing traffic safety of trains, are rail circuits. They serve as primary information source about a status of controlled sections of rail track. However due to several of objective reasons (low resistance of the ballast, limited length, absence of possibility to isolate rails from bridge constructions, considerable operational costs etc.) it is sometimes technically inexpedient to use rail circuits.Monitoring of the free status of such track sections can be also realized on principle of counting of wheel pairs entering and quitting from a section. Systems of axle counting are intended for operation as a part of systems of railway automation and supervision at railway transport of the main lines and on specialized ways (industrial transport), for monitoring of clearance (occupancy) of multiple and non-branched tracks at stations and runs of any kind of trains traction.Systems of axle counting of rolling stock give the chance to count automatically the axles of a rolling stock passing through certain points of station in any direction and for any time frame, and also to archive this data. It will allow obtaining information on quantity of the cars being at any time and on any sections of a way, for example: at receiving-departure yards, point switch free sections in neck yards, stud tracks, on runs.Axle counters are recommended to implementation:

In some cases counters of axles can be applied along with rail circuits.Axle counting system provides:

Today there are following technical solutions of axle counting:

when the station is equipped with devices of axle counting system then there is not required installation of insulating joints and the choke transformers on boundaries of uncodable track and switch sections.At stations with electrical traction to provide plumbing of a traction current, conductor bonds and electro tractive connectors are installed.Conductor bonds and switch point connectors can be avoided in case of self-consistent traction (except codable sections).Due to axles counting devices don’t supervise integrity of rail lines, and in absence of rail circuits, as a rule, it is impossible to realize coding of tracks by ALSN codes, implementation of axle counters on the main way of stations, ways of the non-stop run and tracks of shuttle and passenger trains traffic, as well as at runs equipped with self locking is inexpedient to apply.When necessary at track sections without rail circuits coding by ALSN codes can be executed by means of a loop (loops), laid down near rails. The maximum length of a loop is recommended to take no more than 250 …300 m. In case of bigger length of a section of tracks it is necessary to use several loops connecting through separate code transformers.The exception of maintenance of the rail circuits which are the reason of 30-40 % of all failures of SCB devices will lead to reducing of delays and idles of rolling stock, increasing of a turn of coaches and locomotives, improving of traffic safety of trains. Operational costs for cutting of ballast, for changeover and the maintenance of elements of insulation of rail lines and bonds, including expenditures for maintenance of rail cars for a welding of bonds (combustive-lubricating materials, repair, workers’ wages) are thus excluded. Features of axle counting system.Main parameters of axle counting system: 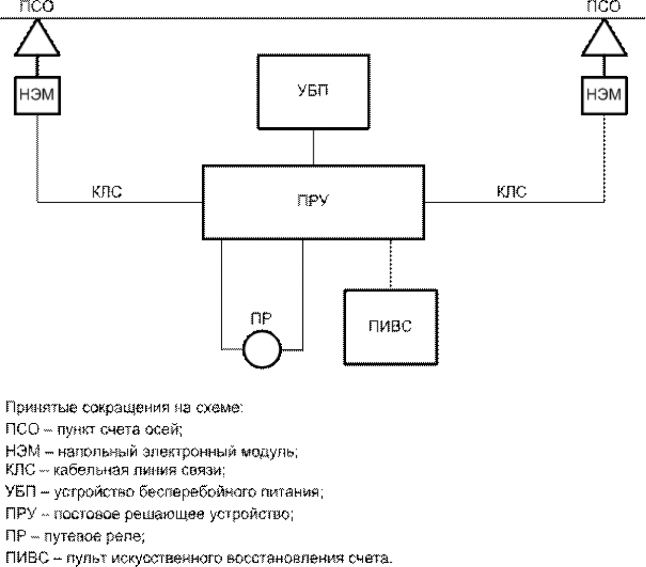 Axle counting posts are designed for receiving of primary data related to number of axle of rolling staff (considering direction of movement), within the limits of sections controlled by system and transfer of data to post computing device. PAC are located in the boundaries of station tracks and switch sections controlled by devices and within the boundaries of approach sections. Each PAC includes track sensor and track side electronic module.Track sensor design generates electric signals when the rolling staff passes over it.Track side electronic module designed for counting of axles of rolling staff passed throug, taking into account direction of tracking, and transfer of this data to post computing device. Beside it controls the trouble free operation of track sensor and its correct position relatively to rail head. Operation sequence During passing by of rolling staff track sensor of axle counting post forms electric signals, which bear information of fact of axle traveling and track direction. Signals of track sensor are incoming through cable to track side electronic module (TSEM), which counts the number of axles fixed by sensor, taking into account the direction of travel.Post computing device, continuously, sequentially inquires axle counting post, which after receiving inquire, transfer data of number of traveled axles to PDMD. Post computing device processes obtained data and controls operation of track relays.During operation process each TSEM is continuously self-tested and supervises performance of track sensor, as well as its correct position relatively to rail. In case of failure or unauthorized dismantling of sensor TSEM transits in protecting status, what bears cutoff of track relay at EI post.In case of failure of any counting post, track relays of track sections adjacent to it will remain without power after factual leaving (emptying) of such section by rolling staff. For removing of false occupation of track and switching sections there is a provision for panel of forced regeneration of initial status of axle counting devices (PFRIS) This panel has a group (junction) button of forced regeneration and individual buttons for each track section and switch section. Economic efficiency of axle counting system is reached by: back