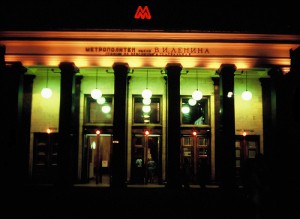 Management of Moscow subway has taken a decision to carry out experimental operation of systems of new generation based on microprocessing devices (MPI) within the frames of upgrading of control systems ensuring safety of train traffic.RWA participates as Contractor at «Maryina Rostcha» station who has earlier experience in installation and successful operation of similar equipment in Kharkov and Kiev subways.Upgrading of «Maryina Rostcha» station of Moscow subway is a pilot project of microprocessor based interlocking that will be installed in parallel with existing relay system including capability of their individual operation.Management of signalling and communication service, during test operation of new system will be obtained a confirmation of fidelity and free faulty operation of equipment, and will be trained the service personnel skills of its operation ans maintenance. Based on this data there will be taken a decision of total upgrading of routine controls of all Moscow subway stations.Package of work of RWA includes elaboration of design and estimate documentation, civil and structural works and start up and commissioning.Commissioning of microprocessor based routine control of  “Maryina Rostcha” station is planned for 3d quoter of 2012.